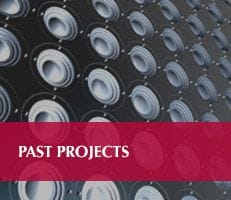 Euroblock connectors are provided for audio I/O, logic I/O and the RW 485 port. Grounding screws for direct connection to the metal chassis are provided for solving EMI problems due to shield wiring. Also found on the rear panel are standard XLR type connectors for the AES3 I/O, an RJ-45 Ethernet connector for computer control and an IEC AC power input.

All DSP algorithms are not created equally and textbook DSP algorithms miss the mark where the rubber meets the road. Rane's team of audio-savvy DSP mathematicians - a rare breed itself - in conjunction with our industry leading analogue signal processing gurus have combined forces to offer superlative digital and analogue audio performance. With 24-bit converters, greater than 106 dB throughput dynamic range and double precision 48-bit internal DSP 'math,' the RPM 88 offers the best DSP algorithms and audio performance available. These ain't no Internet appliances! For example, the RPM 88's 400 MIPs translate into 225 fully parametric EQ filters, should you need multiple channels of 15 band parametrics and nothing else.

Multiple units are controlled from a single computer using low cost Ethernet switches. The recessed Default button on the rear panel recalls Preset 1 in case of communications failure. The front panel has three-segment LED meters for each input and output, allowing fast and intuitive signal flow verification without a computer. Control Port, Power, Ethernet and Status indicators are also on the front panel. Powered from an internal UL recognised, CSA and CE certified power supply, the RPM 88 is compatible with any installation mandating agency compliance.

We have employed the services of SAV Systems for several years now at the Lodge. Their professionalism, service and price point are second to none, as is their equipment and how it is backed up once it is installed into our club, we highly recomm...
Brendan Ozolins